The Download Updates feature helps you gather and maintain Windows updates with ease and reliability.
The Downloader can be accessed via the toolbar under the Source page – Tools, or the Updates page – Add – Latest online updates, depending if just downloading or integrating the updates directly.

Download and Enqueue
It can be used to only get latest updates even before loading any images, or to enqueue updates for download plus integration in the same session.
Enqueue is helpful to handle updates as they were already downloaded, to not wait for downloads to finish before editing the image. 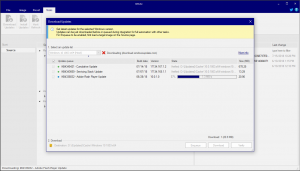 Update lists are manually curated, usually updated within a few hours from an update’s release.
While lists are downloaded from our server, the actual updates are downloaded only from Microsoft’s servers and the tool internally does not allow any other way.

– Update Cache
Before using the Downloader it is recommended to set the desired download location under the File – Settings – Update Cache directory option.
You can use the subfolders to organize your other updates, even not on the online update list. Update files can be renamed and are still properly detected.
Downloader lists any found updates in those subdirectories depending on the Windows version selected.
Here are some self-explanatory examples of the subdirectory names: 10.0.1803.x64, 10.0.1607.x86, 6.3.U3.x64, 6.1.SP1.x86
Or simply download an update from a list and allow the tool to create the appropriate subfolder.

– Verify
After opening the Downloader, if there are any pre-existing updates in the Update Cache folder, it is recommended to first Verify the updates.
That will trigger hash check which helps also detect incomplete downloads, among any corrupted or replaced ones. Only the updates from the online list are supporting verification.

– Enqueue
Adds the updates to the Updates – Integration Queue, ready for integration to the loaded image.
For Enqueue to be enabled, first load a target on the Source page.
Any non-existing updates will be automatically downloaded before integration once the Apply – Process has started with all of the other pending changes.

– Trim
To easily delete unlisted updates from the Update Cache, including the obsolete ones, use the File – Settings – Update Cache Trim option.

In further efforts to make NTLite work natively out of[...]

How to return components or install cumulative updates